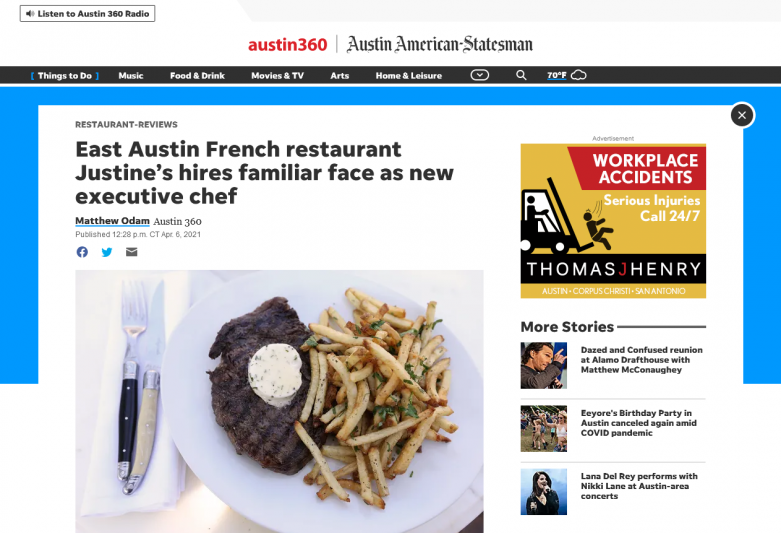 Justine’s, the swinging French brasserie in East Austin and regular member of the Austin360 Dining Guide Top 50 restaurants in the city, has made a change at the top of its playbill. The restaurant from owners Pierre Pelegrin and Justine Gilcrease announced last week that a familiar face is returning to take control of the kitchen.

Huffman, who has spent time in France visiting oyster farms, working a grape harvest and cooking for winemakers, tells the American-Statesman that he intends to focus on Southern French Provençal cuisine and highlight seafood on the seasonal blackboard menu of specials at Justine’s. He is also planning a raw bar on the patio for spring and summer.

“I also plan to focus on true French seasonality and make food that represents the regions that Pierre loves and that produce what Pierre considers comfort food,” Huffman wrote in an email. “My first seasonal menu special at Justine’s will feature true representations of springtime in Southern France, including seared scallops with nettles and fiddlehead fern; grilled espelette and herbs de Provence octopus; and a cold white asparagus and lobster salad with smoked trout roe.”

Huffman, who has been running burger and natural wine pop-up Le Beef during the pandemic with his wife, Nicole, previously worked in Austin and at Uchi, Uchiko and Contigo. The couple, who met while working at Justine’s, will continue their Le Beef pop-ups; previous dinners have been held at places such as Gelateria Gemelli, Hold Out Brewing, Meteor and Little Trouble in Lockhart (from former Justine’s chef Casey Wilcox). They have plans to open a brick-and-mortar restaurant in the future.

Justine’s announced Chambers’ exit on its Instagram page with an eloquent and loving message that most departing employees could only hope to receive from their bosses.

"We’re excited for this new chapter of Taylor’s life and can’t wait to see what’s next for such an already remarkable talent. He is literally one of the kindest, most decent humans we know,” the message read in part. “Over the years, Taylor has gifted us wisdom, equanimity, leadership, survival skills (on an Andalusia bike ride gone awry), and one of the most magical dinners (also in Andalusia) we’ve ever had. He was instrumental to our surviving the pandemic and, for that alone, we can’t thank him enough.”

This article has been aggregated from austin360.com and they maybe/are the copyright owners of the same. If you are the Author/Copyright owner of this article and want us to remove the same then send an email to admin@blog.restaurant so that we can delete it immediately. We sincerely regret and apologies for any inconvenience caused to you due to the same. Though it is your decision but please take note that the link to your website and the article have been given above, within and on the bottom of the article.