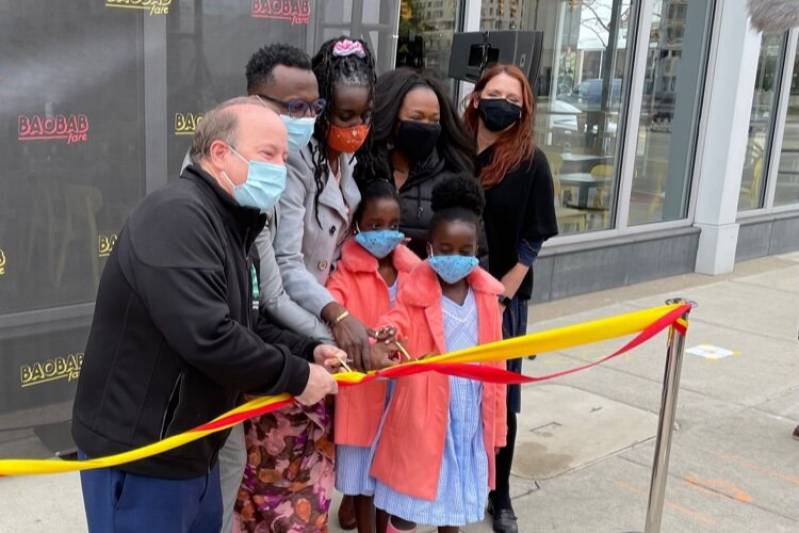 It was 2014 when Nadia Nijimbere and Hamissi Mamba fled the East African nation of Burundi for Michigan. They would arrive at Detroit’s Freedom House, a temporary home for people seeking asylum in the United States and Canada, people who survived persecution in their home countries and can’t safely return.

“We are proud to open our doors and bring East African cuisine and culture to our community,” Mamba says. “Baobab Fare is more than a restaurant; it is a gathering place where all are welcomed and embraced. Detroit is our new home.”

“I am thrilled to welcome Detroit’s first East African restaurant, Baobab Fare to New Center,” says Mayor Mike Duggan, left.The restaurant, which had been operating under a soft opening since February, was celebrated with a ribbon cutting ceremony on Thursday, April 1. One of the city’s most hotly anticipated openings, the celebration drew a number of notable Detroiters, including Mayor Mike Duggan, Sue Mosey from Midtown Detroit, Inc., Vittoria Katanski from Hatch Detroit, Chanell Scott Contreras from ProsperUS, and more.

"Working with Mamba and Nadia to help them open up the restaurant has been an honor,” says Vittoria Katanski, executive director of Hatch Detroit. Baobab Fare won the 2017 Comerica Hatch Detroit small business contest, winning a $50,000 grand prize and pro bono resources and business support.

“They have put so much of themselves into this business — every part curated to welcome patrons as part of the Baobab family. Hatch Detroit looks forward to continuing our support to help ensure the business remains a part of Detroit for years to come."

In fact, it was through the ProsperUs entrepreneurship training program where the idea for Baobab Fare was first conceived.

"Nadia and Mamba are an inspiration and ProsperUs is honored that our services and capital helped bring Baobab Fare to life,” says Chanell Scott Contreras, executive director of ProsperUS. “We couldn't be more excited to see this business add to the richness and diversity of Detroit."

Got a development news story to share? Email MJ Galbraith here or send him a tweet @mikegalbraith. 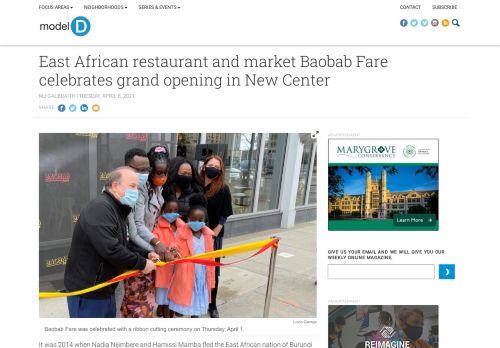 This article has been aggregated from www.modeldmedia.com and they maybe/are the copyright owners of the same. If you are the Author/Copyright owner of this article and want us to remove the same then send an email to admin@blog.restaurant so that we can delete it immediately. We sincerely regret and apologies for any inconvenience caused to you due to the same. Though it is your decision but please take note that the link to your website and the article have been given above, within and on the bottom of the article.