Durham Restaurant Is the Victim of Mistaken Identity

Durham Restaurant Is the Victim of Mistaken Identity 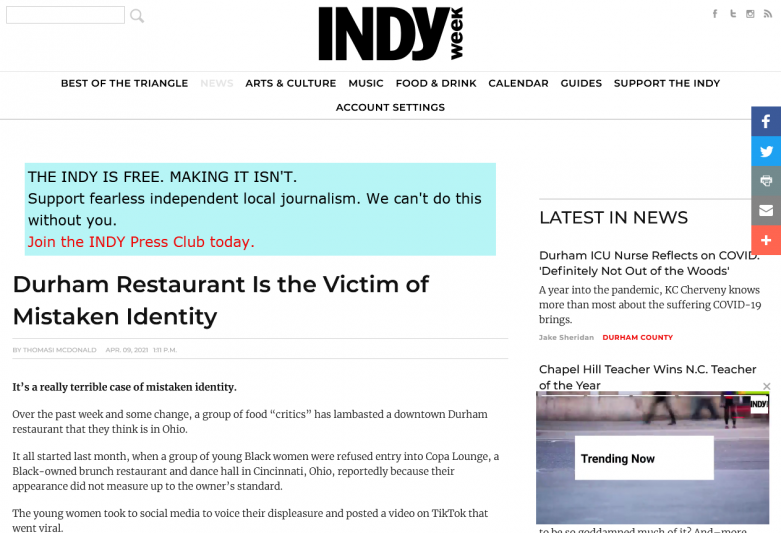 Over the past week and some change, a group of food “critics” has lambasted a downtown Durham restaurant that they think is in Ohio.

It all started last month, when a group of young Black women were refused entry into Copa Lounge, a Black-owned brunch restaurant and dance hall in Cincinnati, Ohio, reportedly because their appearance did not measure up to the owner’s standard.

The young women took to social media to voice their displeasure and posted a video on TikTok that went viral.

Supporters of the young women took matters into their own hands and decided to punish the owner of the Copa in Cincinnati with an avalanche of rodent- and vermin-filled, one-star reviews on Google and Yelp.

“When I got there the roaches and rats had a cookout and the owner told me to join bc I am one [I] do not recommend,” read one Google review.

“TELL ME WHY I went to use the bathroom and I saw a roach taking a bath in the toilet he climbed on me and used my hair to towel,” complained another reviewer, who went on to explain that the owner summoned “his rat army” to stomp on her head.

No one will ever mistake the fledgling food critics as the next Frank Bruni, Katie Lee, or Anthony Bourdain, still the bogus review posters are having a great go of it in their quest to embarrass, harass, and hopefully, drive away would-be patrons from the Copa at 1133 Sycamore Street in downtown Cincinnati.

Early Thursday evening, a reviewer on Google claimed he walked into the place and saw roaches doing the “Macarena.” The day before one “JFreeman” wrote that the rats were nice enough, but the owners were horrible.

“They tried to make me piss on the floor for the roaches to drink so I left soon after. I’m just glad the roaches liked it,” he wrote.

The cynical reviewers thought they were basting the owner of the Copa in Cincinnati, but a married couple that owns a Cuban restaurant with the same name in downtown Durham were the actual recipients of the bad reviews.

In 2018, Roberto Copa Matos and his wife Elizabeth Turnbull opened the restaurant COPA in downtown Durham.

Last week, the owners announced the business would be closed for two days so that the entire restaurant staff could receive and recover from their Covid vaccinations. Soon after the announcement, the rotten reviews started showing up.

“At first I thought it was the anti-vaxxers,” Turnbull told the INDY.

When Turnbull went online to do some research, she discovered the incident at the Cincinnati Copa and the viral video.

“They had the wrong Copa,” Turnbull says. “But someone has imagined we’re the right Copa.”

Since then, Turnbull and Matos have responded to the absurd reviews by explaining to the posters that it's a case of mistaken identity.

“PLEASE, I ask that you please remove your negative review. We are a diverse, living wage certified business in DURHAM, NORTH CAROLINA. Please don’t make our team pay for the mistakes of another,” they wrote to the reviewers.

A great deal of Turnbull and her husband’s frustration about the false and misguided reviews is attributed to the responses of Google and Yelp.

“The reviews take 30 seconds to post,” Turnbull says, “but it takes hours and days to remove.”

Yelp has removed the false posts, but the nasty reviews still appear on Google. In addition to flagging the reviews, Turnbull says she has repeatedly tried to contact someone at the company.

“If social media platforms are responsible for removing fake news, review sites are also culpable for false, defamatory, vicious reviews,” she says. “It’s not okay to say, ‘I have a platform, but I’m not responsible for what happens.’”

The trouble originated on March 30, when a video of four women appeared on social media minutes after they were turned away from the brunch bar in Cincinnati.

“We just left the Copa in Cincinnati, Ohio. The brunch place, a Black-owned business, and they did not let us in,” one woman says.

“Because of how he wants people to look,” a second woman says in the 52-second video. “Not how we as women, as beautiful Black women want to look, but like he frickin’ wants us to look.”

The camera phone is turned toward a third woman in the car who looks perfectly appropriate for a birthday brunch or worship service. The women explain that the owner was unhappy because the lace in front of her wig was showing.

The owner of the brunch bar was not immediately available for comment.

Meanwhile, Turnbull says even though they are hurt by the scurrilous reviews, the women’s supporters are not really referencing the serious issues of racism, sexism, and colorism that are getting buried by the exaggerations and cancel culture reviews.

The real issue is [four] women showed up and some other grown-up thought they could police their bodies,” she says. “I want these women to know that’s not okay and they are welcome here with us.” 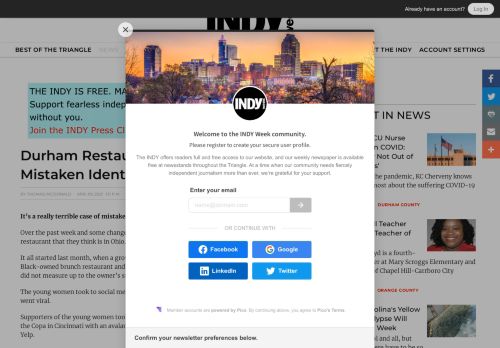 This article has been aggregated from indyweek.com and they maybe/are the copyright owners of the same. If you are the Author/Copyright owner of this article and want us to remove the same then send an email to admin@blog.restaurant so that we can delete it immediately. We sincerely regret and apologies for any inconvenience caused to you due to the same. Though it is your decision but please take note that the link to your website and the article have been given above, within and on the bottom of the article.