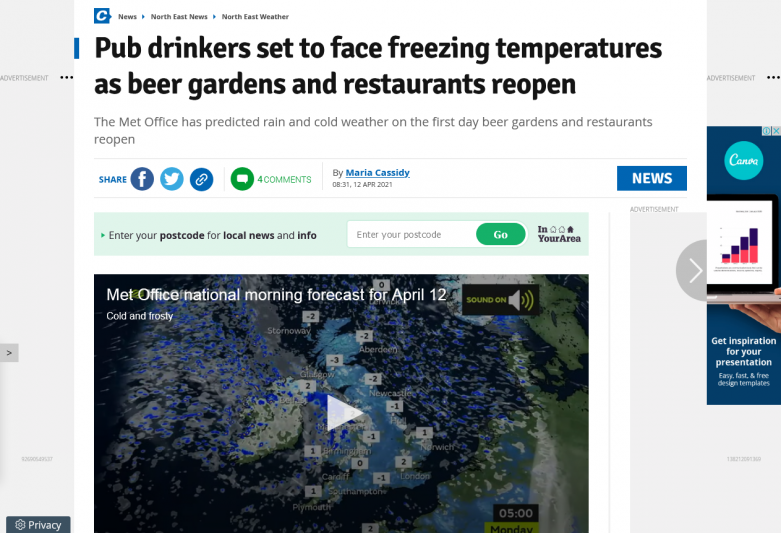 Anyone heading to the pub or for a bite to eat outside today will have to wrap up as temperatures are set to drop on the first day of hospitality businesses reopen.

The Met Office has predicted that areas in the south of the UK will likely to be hit by rain however the north will wake up to a bright Monday morning.

Beer gardens, restaurants and non-essential shops are set to reopen today in England as part of the Government's roadmap plan to the easing of restrictions.

Forecasters have said there will be lots of sunshine to come on Monday morning for Scotland and parts of England as people head into town centres for the next phase of the roadmap.

However, parts of the south of England will see a cloudy start to the morning with rain, sleet and snow possibly affecting some areas.

In the North East, it is set to be a sunny but chilly day in most areas of the region. Clouds will set in some areas along with a risk of a few showers.

It's expected to stay dry with some sunny spell for the rest of the week.

Here is Monday's forecast for the North East

Met Office statement said: "A dry and frosty, but mostly sunny start with light winds. Cloudier from late morning with sunny spells and perhaps a few isolated showers by the afternoon; these wintry on hills.

"Still rather cold, but feeling warmer in the sunshine. Maximum temperature 9 °C."

The area will stay sunny from the morning straight through to the afternoon. There will be some clouds this evening but with breaks of sunshine. At midday the temperature is expected to be 5°C while later tonight at 7pm it will drop to 4°C. The maximum temperature is 7°C at 5pm.

In Newcastle, it will be a sunny start with some clouds in from the early afternoon. However, the sun is set to stay throughout the afternoon. At 12pm the temperature is set to be 6°C and will drop down the same later in the evening. The maximum temperature is 8°C at 3pm.

In Hexham, the weather will remain sunny throughout the morning and into the afternoon. The cloud will start to appear in the late afternoon as the temperature starts to go down. From midday the temperature will be 6°C and will reach as low at 7pm this evening. The maximum temperature is 8°C at 2pm.

In Seaham, it will be a sunny start to the day but mostly cloudy from 10am through to late afternoon. There will be some breaks of sunshine throughout the day. At 12pm, the temperature is expected to be 6°C and will go as low as 5°C at 7pm tonight. The maximum temperature is 6°C from midday. 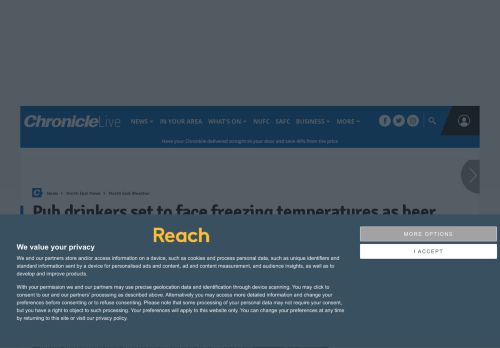 This article has been aggregated from www.chroniclelive.co.uk and they maybe/are the copyright owners of the same. If you are the Author/Copyright owner of this article and want us to remove the same then send an email to admin@blog.restaurant so that we can delete it immediately. We sincerely regret and apologies for any inconvenience caused to you due to the same. Though it is your decision but please take note that the link to your website and the article have been given above, within and on the bottom of the article.