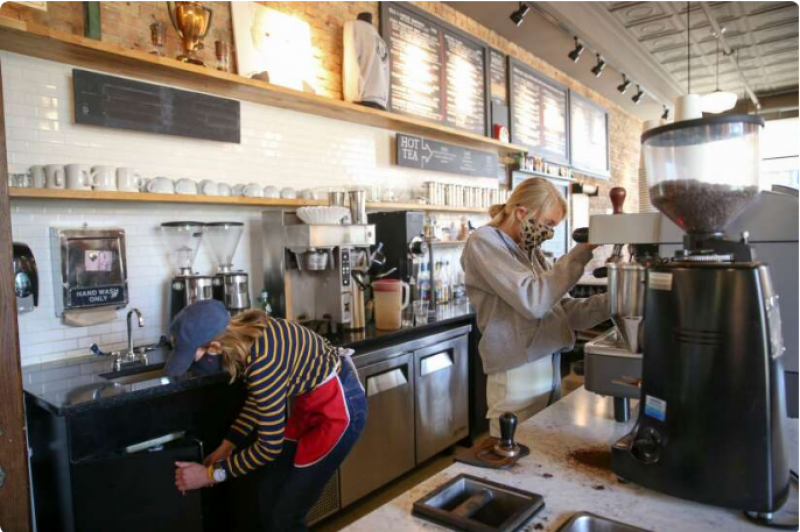 Hadley Shriver (right) prepares a drink as her mom and business co-owner Andrea Shriver replaces milk to the refrigerator last Thursday at Brewhemia in Cedar Rapids. Restaurants are preparing for a busy summer, but a shortage of employees is holding some owners back from expanding hours and services to pre-pandemic levels. (Rebecca F. Miller/The Gazette)

With COVID-19 vaccinations and warmer weather showing promise for bringing restaurants back to pre-pandemic levels, owners and managers trying to prepare for increased business are facing a drastic shortage of job applicants.

As diners find more confidence to go back out to eat, a dwindling pool of both front-of-house and back-of-house employees could impact the path back to the normalcy that customers may be expecting.

“In the old days, we’d get 30, 50, 75 applications for a job,” said Steve Shriver, co-owner of Brewhemia, a breakfast and lunch cafe in downtown Cedar Rapids. “Now, we’re getting one or two if we’re lucky. It really makes it hard to make a good hire.”

And though back-of-house positions for workers like line cooks were tough to fill even before the pandemic, the shift posed by the pandemic has also sharply affected front-of-house hiring for servers, hosts, bussers and bartenders.

“For front of house, it hit all at once,” Shriver said.

Though Brewhemia has found the staff it needs to tread water for now, the restaurant anticipates future challenges as it sees sales volume increasing. The cafe currently is at about 75 percent of its pre-pandemic staffing and sales levels. Though it wants to expand, it’s being cautious after emerging from a calamitous time in the service industry.

Some new restaurants, like Ramen Belly in Iowa City’s Peninsula Neighborhood, have stabilized hiring enough to get off the ground by tapping into new employee sources.

“In the beginning, it was extremely tough,” said co-owner John Lieu. “It didn’t used to be that way.”

The former owner of Iowa City’s Takanami, which first opened nearly 20 years ago, said his new venture had to hire high school students — something the restaurateur had never done before. Though his younger hires have been good employees, he said, they come with some caveats like being able to work only limited hours during the school year and being unable to serve alcohol.

“This is the first time I’ve had to hire students under 18. Back then, I’d have stacks of applicants,” Lieu said. “You could pick and choose. Now, it’s whoever comes through the door. Hopefully they’re a good person and willing to work hard.”

With staff levels at Ramen Belly sufficient for now, he sees the need increasing in the near future if business does well as he anticipates. Brewhemia expects to be at pre-pandemic sales levels by the end of the summer.

Jessica Dunker, president and chief executive officer of the Iowa Restaurant Association, said restaurant owners have told her the need for workers is the worst it has ever been.

“Right when we’re on the cusp of being able to fight back from what is arguably the single-most devastating thing that has ever happened in our industry, now we don’t have the people to come in at exactly the time we need them,” Dunker said.

The lack of available workers is especially problematic with outdoor dining resuming as the weather warms.

Danny Standley, managing partner at Big Grove Brewery and Taproom in Iowa City, said the restaurant usually hires an additional 15 to 25 employees between front-of-house and back-of-house positions in the warmer months.

“We’re getting busier, but we’re not quite getting enough people to help out with that” higher level, Standley said.

Dunker attributed some of the worker shortage to the combination of lack of child care and additional unemployment benefits available during the pandemic.

“Maybe their kids aren’t fully in school, and they can still get that enhanced unemployment,” Dunker said. “Until life settles down for their families, there are those situations with a lot of working moms in our industry.”

Some restaurant employees who were let go or faced reduced hours at the start of the pandemic since have moved on to work in other industries that aren’t so financially vulnerable at the “tip of the spear,” Dunker said.

“If all of a sudden you are the industry that is on the front line of being closed in case of a public health emergency or a pandemic and you are supporting a family and there’s the opportunity to work in another industry, you might take it,” Dunker said.

While many other industries are nearing pre-pandemic levels of employment, the leisure and hospitality sector, which includes restaurants, hotels and event planning, still is seeing substantially lower employment.

It has forced many restaurants to get creative about how to serve customers with fewer people.

At Big Grove, employees have been taking on tasks that usually would be outside their purview, Standley said as he was delivering baked goods to the Solon location on a Thursday afternoon.

“I normally would not be the one doing this,” he said.

He was planning on spending the rest of the afternoon calling potential applicants, a task usually for the chef de cuisine — but the chef needed to be in the kitchen.

Standley said Big Grove’s leadership team is reiterating to staff members to take breaks and be “very conscious” of their hours to avoid burnout.

“If they’re not taking care of themselves, then they won’t be able to take care of their co-workers and our guests,” Standley said.

Other leaders in the industry are hopeful that quality tipping, which saw a marked increase during the pandemic when diners expressed more appreciation for those working in service positions, continues.

“One thing crucial to sustaining and bringing back employees is tips,” Shriver said.

Many quick-service or fast food restaurants, Dunker said, have kept their dining rooms closed while operating with a reduced workforce. “It has nothing to do with COVID,” Dunker said. “It has to do with you don’t have the people to do a drive-through and a dining room, so they just stick to that drive-through.”

Dunker has also heard of one restaurant group having “rolling blackouts” where different restaurant locations are closed on different days.

On certain days, Ramen Belly had to resort to limiting the number of orders it accepted, with cooks overwhelmed by the number of tickets. Some orders at the fast-casual restaurant took about 45 minutes to prepare when that happened. Other times, Lieu said understaffing meant that both owners came in for hours of food prep, only to still run out of food by the end of the night.

Restaurants like theirs, either wanting to expand to serve another meal or expand capacity with patio seating, are forced to wait until more help arrives.

Other restaurants have tried to lure help in a more straightforward way: pay increases. Brewhemia has offered 25 percent more than its standard wage and still sees little movement for its back-of-house positions. Ramen Belly said servers could potentially make $18 per hour after tips, and chefs or cooks could make over $20 per hour. Lieu heard of other businesses offering signing bonuses.

“I wouldn’t have made that kind of money when I was their age,” Lieu chuckled.

The need to hire more employees is a good sign for business, some restaurant owners say. But until that area of the industry recovers, restaurants are forced to work with what and who they have.

“I think the only thing that’s going to heal the current challenges is time, ” Shriver said.

A sign marks an area where customers can sit and use laptops in order to free up space for socially distant tables at Brewhemia in Cedar Rapids. Photographed Thursday. (Rebecca F. Miller/The Gazette)

Brewhemia is seen Thursday in Cedar Rapids. “In the old days, we’d get 30, 50, 75 applications for a job,” said Steve Shriver, co-owner of Brewhemia. “Now, we’re getting one or two if we’re lucky. It really makes it hard to make a good hire.” (Rebecca F. Miller/The Gazette)

Hadley Shriver prepares an espresso Thursday at Brewhemia in Cedar Rapids. Restaurants are preparing for a busy summer as diners gain confidence to return, but a shortage of restaurant workers is holding some owners back from expanding hours and services to pre-pandemic levels. (Rebecca F. Miller/The Gazette)

Matt Danielson, co-owner, talks with a customer Thursday at Brewhemia in Cedar Rapids. Brewhemia expects to be at pre-pandemic sales levels by the end of the summer. (Rebecca F. Miller/The Gazette)

This article has been aggregated from www.thegazette.com and they maybe/are the copyright owners of the same. If you are the Author/Copyright owner of this article and want us to remove the same then send an email to admin@blog.restaurant so that we can delete it immediately. We sincerely regret and apologies for any inconvenience caused to you due to the same. Though it is your decision but please take note that the link to your website and the article have been given above, within and on the bottom of the article.