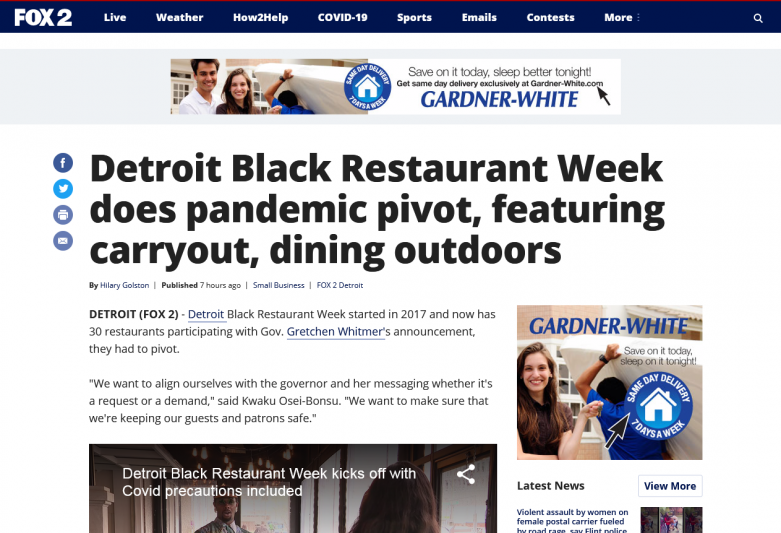 DETROIT (FOX 2) - Detroit Black Restaurant Week started in 2017 and now has 30 restaurants participating with Gov. Gretchen Whitmer's announcement, they had to pivot.

"We want to align ourselves with the governor and her messaging whether it's a request or a demand," said Kwaku Osei-Bonsu. "We want to make sure that we're keeping our guests and patrons safe."

Detroit Black Restaurant Week started in 2017 and now has 30 restaurants participating with Gov. Gretchen Whitmer's announcement, they had to pivot.

Friday is the start of  Detroit Black Restaurant Week - the same day Whitmer requested a pause on in-door dining and other measures to curb the spread of COVID-19, so the dozens of restaurants participating are making changes.

"We're getting people to take part in carry-out, dining at home, and make sure you document that experience too," said Osei-Bonsu.

"We're very proud to be a part of this event this week," said Kristy Cook, GM Central Kitchen + Bar. "The pandemic has had an effect harder on Black-owned businesses than it has other businesses."

The general manager of Central Kitchen and Bar, a Black-owned restaurant in downtown Detroit - one of the restaurants being featured this week - says they've had to adjust through the pandemic.

"I am vaccinated, I've had it, I'm okay," Cook said. "But you don't know who is coming into your restaurant. So you need to do your job as well."

"We're also promoting outdoor dining," said Osei-Bonsu. "We already have gotten guidelines from the city for what outdoor dining is, and how it is defined. So we are looking to get people engaged in that more than ever."

And if you're interested in any of these restaurants, the complete list of participating locations is below and for more on the event click this link: https://blackrestaurantweeks.com/

Good Times on the Ave

The Kitchen by Que 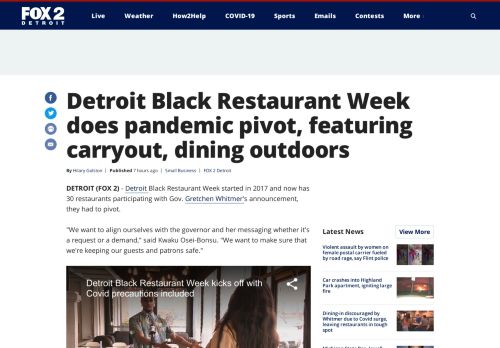 This article has been aggregated from fox2detroit.com and they maybe/are the copyright owners of the same. If you are the Author/Copyright owner of this article and want us to remove the same then send an email to admin@blog.restaurant so that we can delete it immediately. We sincerely regret and apologies for any inconvenience caused to you due to the same. Though it is your decision but please take note that the link to your website and the article have been given above, within and on the bottom of the article.