The Delhi government is mulling to collect samples from people while they are at restaurants, markets and other public places in a bid to... 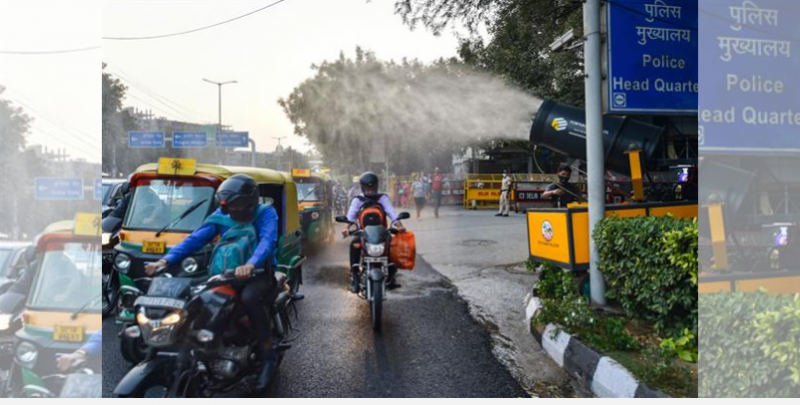 The Delhi government is mulling to collect samples from people while they are at restaurants, markets and other public places in a bid to strengthen its COVID-19 surveillance mechanism amid a massive surge in daily cases in the last few days, sources said on Tuesday.

It was decided to concentrate efforts in certain key areas, such as targeted RT-PCR testing in sensitive and critical zones such as restaurants, market places, barber shops and salons; gear up the availability of medical resources including beds, ICUs, and ventilators as a preemptive measure; and ensure high degree of contact tracing along with monitoring of quarantined contacts so as to suppress and break the chain of transmission, the Home Ministry had said in a statement.

A source in Delhi government’s health department said, in targeted testing, samples are collected at regular intervals from a restaurant or a market place in an area, from where high number of cases is getting recorded, or where safety protocols may not have been adhered to diligently.

“Right now, no instruction has been given, but to conduct RT-PCR tests on a targeted audience, a kiosk perhaps would be made in a market place or near designated restaurants to collect samples from shoppers and visitors, at regular intervals,” a source said.

According to experts, if in a public place, a person removes mask and the prescribed distance of 2 m is not followed, the virus transmissibility increases.

“In a restaurant, if a guest sneezes while eating or talking and his face is not covered (in a close-door environment), the droplets let out from his mouth or nose can get suspended in air due to winter and pollution, and all other guests sitting in the restaurant are then susceptible to get infected,” a senior doctor at a Delhi government hospital who did not wish to be named said.

Also, at market places, a safe distance of 2 m is difficult to maintain especially with crowding due to the festive season, so people would have to be very careful, he said.

Delhi recorded 4,001 COVID-19 cases on Monday with positivity rate hovering around 11 per cent, even as the Centre attributed the sudden surge in daily incidences in the last few days to greater movement of people during festive season and laxity in adhering to safety norms.

Delhi had recorded over 5,000 daily cases for five days on the trot, ending Sunday when the count stood at 5,664.

The Home Ministry in the statement also had emphasised that Metro travel should be carefully regulated as per the SOPs.

“The recent surge in the number of active cases was attributed to the festival season, which has witnessed greater movement of people, accompanied by laxity in adhering to the basic principles of safe COVID behaviour,” it said.

The number of containment zones in Delhi increased to 3,416 on Monday from 3,359 on Sunday.

“We are in the process of follow-up action in view of the recent meetings and experts suggestions over ways to check the increase in the number of COVID-19 cases. A more targeted approach has been suggested by the experts,” a Delhi government official said.

The district officials said although no specific directions have been received by them, they were already carrying out intensive testing and enforcement drives for COVID-19 appropriate behavior in the city.

“The revised strategy to deal with spurt in COVID-19 cases, has emphasised on focused testing, raising RT-PCR tests and mass awareness to encourage people to wear masks, maintain social distance,” said a district magistrate on the condition of anonymity.

The sudden spike in cases comes amid the festive season and rising pollution level. While Durga Puja celebrations ended on October 25, Diwali and Chhath fall in November.

The National Centre for Disease Control in a report drafted recently had warned that Delhi needs to be prepared for about 15,000 fresh cases of COVID-19 per day taking into account the upcoming winter season-related respiratory problems, large influx of patients from outside and festive gatherings. 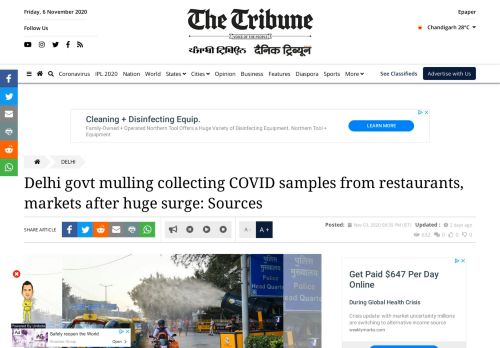 This article has been aggregated from www.tribuneindia.com and they maybe/are the copyright owners of the same. If you are the Author/Copyright owner of this article and want us to remove the same then send an email to admin@blog.restaurant so that we can delete it immediately. We sincerely regret and apologies for any inconvenience caused to you due to the same. Though it is your decision but please take note that the link to your website and the article have been given above, within and on the bottom of the article.