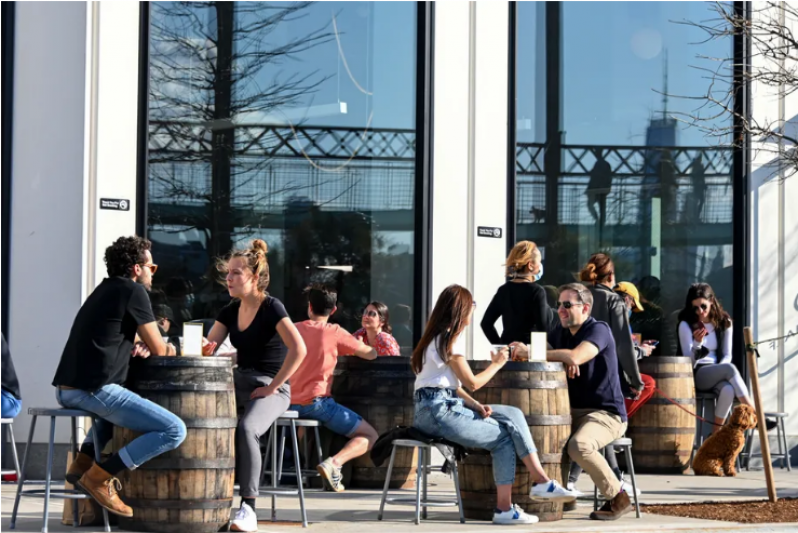 NYC Mayor Bill de Blasio is pushing to have the entire city — including restaurants and bars — fully reopen this summer.

“Our plan is to fully reopen New York City on July 1st. We are ready for stores to open, for businesses to open, offices, theaters, full strength,” de Blasio said during a Thursday appearance on MSNBC’s Morning Joe, pointing to the state’s progress in distributing vaccines. The mayor clarified in a Thursday press conference that the reopening plans include a full comeback for restaurants and bars.

“This is going to be the summer of New York City,” de Blasio said.

A full reopening in a little over two months is a large jump from how the city’s restaurants and bars are currently allowed to operate. Indoor dining has been open at 50 percent capacity since mid-March. Just this week, Gov. Andrew Cuomo put a timeline in place to fully eliminate NYC’s dining curfew by May 31. Bar seating, which hasn’t been allowed for over a year, is set to return on May 3.

Still, many restaurant owners have been eager to reopen and had called on the local government to set a clear timeline for a full reopening of their businesses. Union Square Hospitality Group CEO Danny Meyer, who was recently appointed chairman of the Board of the New York Economic Development Corporation, made an appearance at today’s press conference and threw his support behind the July reopening goal.

“This is a city that is built on people wanting to live closely together, to work closely together, to be live audiences, to be performers,” Meyer said. “Those are the very things that have been unsafe to do during the pandemic, but now we’re going to be able to bring that back.”

De Blasio said that fully reopening the city could involve “looking at” the possibility of using “vaccine passports” for indoor events, whereby restaurants and other businesses can refuse service to customers who have not been vaccinated. “I think some institutions are going to choose to do that,” de Blasio said. “I think it will make sense in some places.”

The return of 24-hour subway service — a concern for some owners when scheduling staff for late-night shifts — was also included in the July opening goal.

Ultimately, the decision to reopen restaurants and bars at full capacity lies with the state government. During a Thursday afternoon press conference, Cuomo seconded the push toward reopening, adding that NYC restaurants could see a full comeback before July if the city’s positivity and hospitalization rates stay down. “I don’t want to wait that long,” Cuomo said of the July 1 target date. “I think if we do what we have to do we can be reopened earlier.”

Safety precautions, including wearing masks and social distancing, will likely remain in place even after restaurants reopen at full capacity, the governor said.

As of April 27, the COVID-19 test positivity rate on a seven-day average in NYC was 3.18 percent, according to city data, tracking below officials’ safety threshold of 5 percent. Close to 9 million New Yorkers — more than 45 percent of the state population — have received at least one dose of the vaccine at the time of publication, according to state data.

This is a developing story and Eater will continue to update this post.