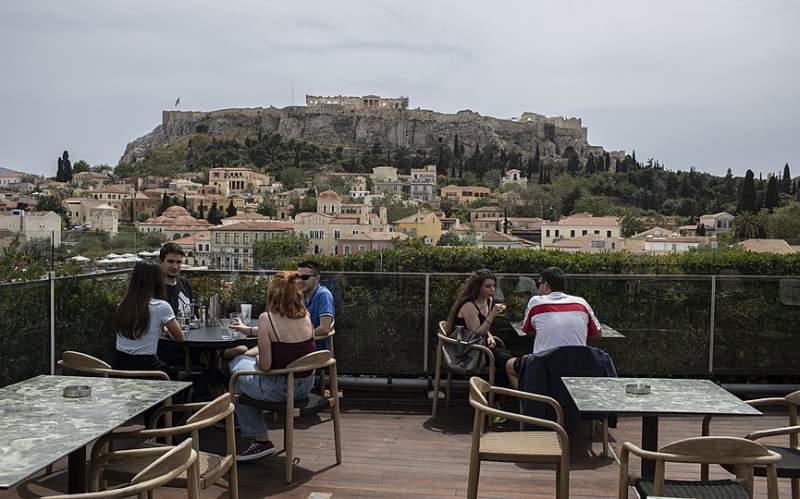 ATHENS - For the first time in six months, people in Greece on May 3 lifted their glasses and dug into grub at a restaurant - outdoors - after relying on take-out delivery during lockdowns aimed at slowing COVID-19’s spread.

The pandemic is still lingering but the New Democracy government, wanting to kick start a stagnant economy and give tourists a reason to visit when the door opens more fully to them on May 15, let the eateries open with outside seating.

That was enough for customers and restaurateurs as it came with Greece enveloped in warm spring weather the day after Easter but also drew a warning from Development Minister Adonis Georgiadis that the pandemic isn’t over until it’s over.

“We are reopening food businesses but the virus is still here. The risk is not over yet,” Georgiadis told state broadcaster ERT.  “We do not want to curb anyone’s freedom, but the virus needs to be kept under control,” he said.

Businesses are only allowed to serve customers outdoors, with distanced tables and up to six per table to limit the number of close contacts. Self-testing and masks are mandatory for workers and music is barred, health officials saying it would make people lean too close to each other to be heard.

The restaurants must close by 10:45p.m. ahead of an 11 p.m. curfew but the government said people returning from eating out or drinking would not face fines for missing the deadline to be home.

In a feature, the news agency Reuters noted the joy that came with the partial reopenings as Greece is already allowing tourists from the United States and a handful of select countries if they are vaccinated or have a negative test result.

"When they brought me the glass of water, I thought, 'It’s like old times again'. It's great," Grigoris Kirlidis told the news agency as he sat at a cafe in Athens.

The government has mostly lifted an already lenient lockdown and there are scenes of people already shunning masks and walking about as if life has already returned to near normal.

Prime Minister Kyriakos Mitsotakis said vaccines and lockdown measures  helped stabilize case rates but he wants the re-opening to move cautiously to avoid a resurgence of infections or variants that could suddenly spring up..

Some three million people, out of a population of 11 million have received at least one dose of vaccine, far less than needed to reach a benchmark of 70 percent of the population - 7.49 million inoculations - to be effective in slowing the pandemic more.

Cafe owner Dyonisis Salpanis told the news agency he was just happy to be back at work after so many months locked down, locked in and locked out.

"We had forgotten what it was like, we see people sitting at the tables," he said. "I hope everything will go well and we don't go back to the way things were before."

This article has been aggregated from thenationalherald.com and they maybe/are the copyright owners of the same. If you are the Author/Copyright owner of this article and want us to remove the same then send an email to admin@blog.restaurant so that we can delete it immediately. We sincerely regret and apologies for any inconvenience caused to you due to the same. Though it is your decision but please take note that the link to your website and the article have been given above, within and on the bottom of the article.