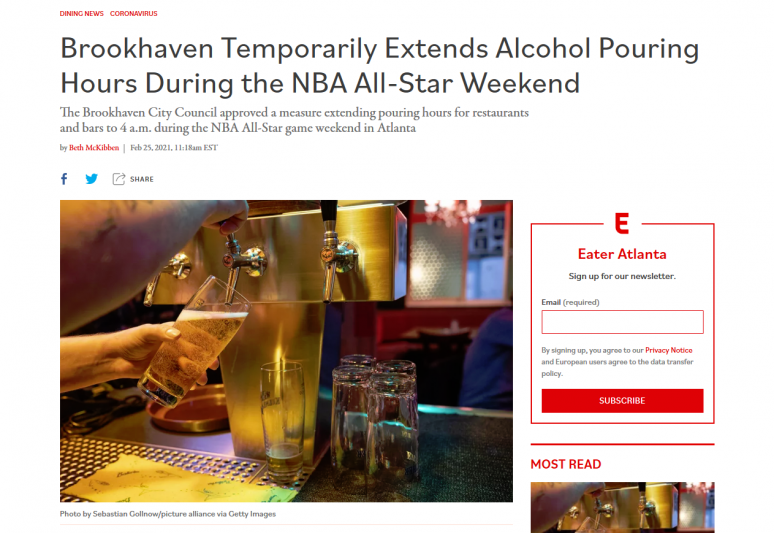 During its February 23 meeting, the Brookhaven City Council approved a measure extending pouring hours for restaurants and bars to 4 a.m. during the NBA All-Star game weekend in Atlanta. The extension, meant to provide a financial boost for the metro Atlanta city’s restaurant industry, goes into effect on Thursday, March 4, and runs through Monday, March 8. The game takes place at State Farm Arena in Atlanta on Sunday, March 7.

Council member Linley Jones was the lone dissenter of the extension, citing the ongoing COVID-19 pandemic and concerns it could lead to a spike in cases.

Jones isn’t the only local official concerned the All-Star game will draw unwanted crowds to Atlanta and surrounding cities during the health crisis. Atlanta Mayor Keisha Lance Bottoms is urging people not to travel to Atlanta for the game, which won’t include fans in the stands this year. The Atlanta mayor is also asking bars, nightclubs, and other venues throughout the city to refrain from throwing All-Star game parties over fears these events could lead to further spread of the virus.

This hasn’t stopped promoters and party planners from going forward with events tied to the game, which highlight appearances by rappers like 2Chainz, Gucci Mane, and Migos. No sanctioned NBA All-Star events and parties are planned.

In December, the city of Atlanta began cracking down on establishments posing as restaurants, like bars and nightclubs, trying to skirt COVID-19 capacity limits. Under the current executive order from Gov. Brian Kemp, Georgia bars and nightclubs are limited to 35 percent capacity inside or no more than 50 people. Restaurants do not have capacity limits and must only allow for proper social distancing between seating arrangements.

To qualify as a restaurant in Atlanta, a business must now receive at least 50 percent of its gross annual sales from food. Businesses will also be audited yearly to assure licensing and paperwork are current and correct. Two violations of the new city ordinance could lead to a business being shut down for a period of time.

The Atlanta City Council unanimously approved a resolution asking the state to add corrections officers, teachers, food, grocery, and agricultural workers, manufacturing workers, and people working for the U.S. Postal Service to phase 1A+ eligibility. The resolution, co-authored by council members Antonio Brown and Dustin Hillis, states that these particular groups are “likely at highest risk for work-related exposure to SARS-CoV-2, the virus that causes COVID-19, because their work-related duties must be performed on-site and involve being in close proximity (<6 feet) to the public or to coworkers.”

The resolution was sent earlier this month to the governor and Georgia Department of Public Health commissioner Dr. Kathleen Toomey for consideration.

Kemp is expected to announce the expansion of vaccine eligibility during a press conference on Thursday, February 25, to include teachers and possibly more medically fragile people and some essential workers in Georgia. The press conference begins at 3:30 p.m. 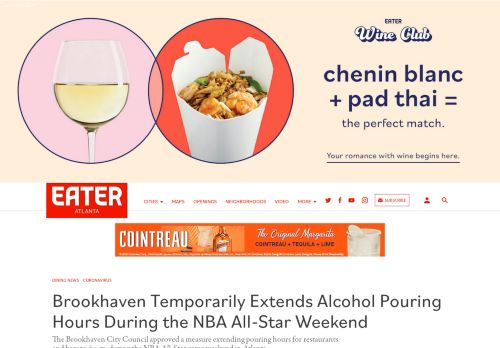