Aspen restaurants feel unheard by Pitkin County Board of Health

Aspen restaurants feel unheard by Pitkin County Board of Health 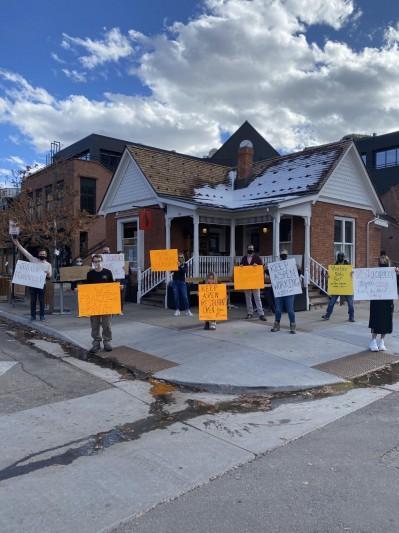 In the wake of the Pitkin County Board of Health’s unanimous motion Monday to ban indoor dining starting Sunday, a few vocal Aspen restaurateurs say they feel unheard by their elected officials.

Hayes, who created the petition Friday morning and spoke during public comment Monday, said later that evening, “I felt like the BOH had already made their decision before the meeting started today.

“[The Board of Health] had already laid everything out. Their plan was there,” Hayes said via phone Monday. “I think the fact that they cut off Jimmy [Yeager] showed that they were kind of over it and they just wanted to get through it.”

Hayes was referring to a somewhat uncomfortable moment during a public comment period of Monday’s meeting in which meeting officials muted restaurant owner Jimmy Yeager’s mic after his statements exceeded the allotted three minutes. When another local restaurant worker spoke up and offered to give Yeager her time, the board visibly fumbled for a moment — clearly trying to set a sense of order for the proceedings — then denied that request, citing the three-minute maximum time as applicable per person.

Yeager, a longtime local restaurateur who has served as a liaison for the business community throughout the COVID-19 pandemic, said he also feels unheard by the BOH.

“What is there to say? Obviously, I feel very let down that the board could not figure out a better way to engage the community to help them figure out a path that they obviously are struggling with themselves,” Yeager said in a phone interview Monday night. “Instead, they opened it up to three minutes per person, anybody who wanted to comment. … If you want to get something done, have a robust conversation. Try to find the right solutions. And maybe that outcome would have been different.”

In addition to prohibiting indoor dining as part of the restrictions of the red zone — effective at 12:01 a.m. Sunday — county officials will apply to what’s called a 5 Star Certification Program. Outdoor dining, takeout and delivery at restaurants will still be allowed; however, tables can only seat patrons of the same household, and last call is 8 p.m.

The 5 Star program encourages businesses to implement safety measures that exceed those already required by public health orders, according to the Colorado Department of Public Health and Environment. In doing so, a business could then become “certified” and allowed to operate with fewer capacity restrictions than those generally required by the county’s corresponding level on the state’s COVID-19 dial.

Yeager said Monday he was frustrated because looking only to restaurants isn't the answer — a sentiment that was expressed by others on Monday’s call, including a few members of the health board who ultimately voted for the measure. He also said the county’s hyperfocus on the incidence rate is a flawed strategy, a point which he also expressed in a letter sent on Friday to public health officials and local media.

“This is the fixation. We are doing an outstanding job at identifying our citizens who are infected with the virus. The result of this success is a recent rise to a high number, and when brought to a state standard of per 100,000, seems insurmountable,” Yeager wrote in the letter. “But is this really a concern? The state is using this metric and has set arbitrary watermarks because they, like everyone else who is trying to protect human life, needs some sort of framework. Incidence rate is not a universal leading indicator.”

Estimates ranged from 1,200 to 1,500 when discussing the number of service industry workers who will be affected by the next restrictions.

Hayes, who closed the petition at nearly 3,400 signatures Monday evening, wrote in its description: “The term ‘industry’ is too vague. We are 1,500 individuals. We have already gone through so much mental and financial stress over the last nine months. To close again would add more to that and we may see a more severe affect.”

Hayes has been in conversation with countless other restaurant workers since creating the petition last week. Asked if he thinks any local restaurants may not bounce back from this next wave of restrictions, Hayes said, “I do.” He believes the uncertainty of what’s next is the worst.

“It feels like one foot, forward two steps back. It’s really tough,” Hayes said. “It sucks.”

“We watched one of our favorite places in the world shut down,” he added, referring to the Red Onion, which announced last month that it would close for the foreseeable future as a result of the pandemic.

Although there has also been talk among restaurateurs of noncompliance with the upcoming round of measures, Yeager said the restaurant community does not want to set a bad example for others to follow.

“That’s a conversation that’s active within the community,” he confirmed. “Most of us feel that is not the right course of action at this point in time … We fear that it would open the floodgates for others to think that all bets were off and they could just do whatever they wanted. So we do not want to lead that type of behavior.”

Despite the disappointing outcome of Monday’s meeting, Hayes concluded that the community must continue to march forward rather than look back.

“At the end of the day, we need to accept the outcome and work together with the restaurant community to get through it and make sure we get to the 5 Star Program to be able to reopen as soon as possible … but we cannot be divided as a community.” 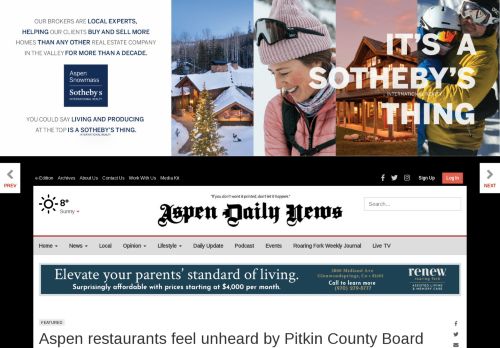 This article has been aggregated from www.aspendailynews.com and they maybe/are the copyright owners of the same. If you are the Author/Copyright owner of this article and want us to remove the same then send an email to admin@blog.restaurant so that we can delete it immediately. We sincerely regret and apologies for any inconvenience caused to you due to the same. Though it is your decision but please take note that the link to your website and the article have been given above, within and on the bottom of the article.