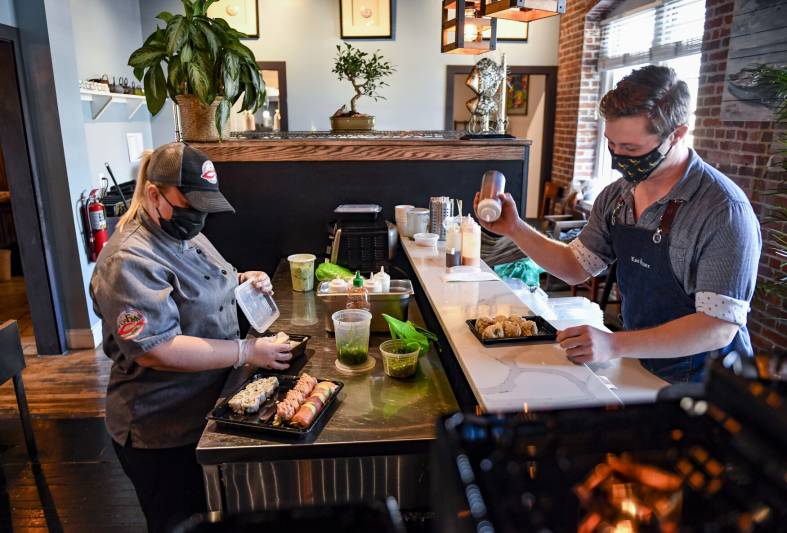 Just take a drive down State Hill Road in Wyomissing, where his The Berkshire Family Restaurant is, and you can see businesses of all shapes and sizes are looking for workers.

"You can go and count them," Vlastos said. "Everyone has hiring signs."

Unlike industries such as retail or manufacturing though, the inability of restaurants to find the help they need has perhaps the most direct and readily apparent impact on consumers.

After all, nobody enjoys a dining experience where waiters aren't around to take orders or food takes forever coming out of the kitchen.

"As restaurant owners, we have to provide a service to our customers," Vlastos said.

"If at end of day I need 12 servers and I have six servers, I can't sit here and pray I'm gonna have servers," Vlastos said. "I need to find a way to serve customers at the level they expect."

It's a common refrain among operators and managers, and the complaint is not limited to any one type of position. Vlastos wants servers and bartenders. Others are seeking kitchen help such as line cooks and chefs. Some could use all of the above.

And with COVID restrictions finally relaxing on restaurants and — hopefully — trending toward full service and capacity, staffing issues may only worsen before they get better.

The restaurant industry is one that's known for high employment turnover, but the problem lately hasn't necessarily been retention.

Even the simple act of finding people who will fill out an application has become a challenge.

"Before, we would maybe get 20, 30 applicants," said Heather Clark, owner of Go Fish! Seafood Restaurant in Sinking Spring. "Now, we'll get like five."

When Go Fish recently lost its sous chef to a job in corporate America, Clark could recall only one applicant for the opening. Fortunately, that person was serious and qualified, and the restaurant was able to fill the position.

Oftentimes, from the already dwindling pool of candidates, many don't bother to follow through.

"Some won't even call back," Clark said. "All of the applicants for the dishwashing position, none of those people called."

The phenomenon of applicants ghosting employers, while always something that could occur, has increased as well.

"We've used everything, Indeed.com (a jobs website), the sign out in front of the building," Vlastos said. "We have people that will schedule interviews and just not show up."

Where are all the workers?

As for the reason why, well, nobody can seem to settle on any, and there probably is no singular answer.

"Death by 1,000 cuts," Vlastos described it. "I don't think you can say it's one particular thing or the other.

"You have kids who aren't in school, so one parent has to stay home. You have someone getting benefits and maybe making less, but if they came back to work, maybe they're losing a lot more paying for child care. And people are hesitant to come back because they think they might not make the money they were before."

Josh Stenchever, general manager for Beer Wall on Penn in West Reading and Beer Wall of Prince in Lancaster County, suggested the financial instability the pandemic created for restaurants may be driving workers from the industry.

"A lot of people probably decided to get out," Stenchever said. "Then you have the people who aren't ready to come back for any reason — socially, economically — whatever their reason for not coming back, but it all leads to a shortage of workers."

The one area where there's some agreement among business owners across the spectrum is that enhanced unemployment benefits as a result of COVID-19 has led some workers to hold out of the job market entirely.

"There are people who still want to do severe social distancing, and government benefits certainly don't help," said Lee Truex, front of the house manager for Go Fish! Seafood. "It's definitely amplified it."

Diagnosing the problem is the easy part. Fixing it is much harder, especially given the challenges aren't exactly the same for restaurant operators across the board.

Beer Wall, for example, reports that its restaurants are fairly fully staffed, save for a few positions — namely a host and line cooks. However, that wasn't without directing significant energy into assisting its laid-off workers and a little bit of plain good fortune.

"We're lucky that a lot of our long-term staff has been with us a long time and we were able to retain a lot of people," Stenchever said, adding it was more important to take care of staff during a difficult period than make money.

"We helped out some of our most at-need employees, getting them food, getting hours to people with kids at home and had situations where they needed to be at work and stuff like that."

Go Fish only reopened in its new Sinking Spring location four months before the coronavirus hit though and didn't have as much dedicated, long-term staff to rely on returning.

And because seafood is such a specialized cuisine, finding kitchen help in particular can be stressful, as it either requires a certain skill set or weeks, even months of training.

"Our biggest challenge is just trying to find qualified people," Clark said. "Finding somebody who knows how to shuck oysters, knows how to cook the proteins correctly, somebody who has knowledge of sushi, that's really hard to find, so we're always training people."

The Berkshire only opened in the middle of the pandemic and didn't have to worry about staff returning from layoffs.

While hiring was and continues to be tough, once people start, Vlasots believes it clears up misconceptions some people may hold about restaurant work right now.

"I think the staff feels appreciated, they're making good money," Vlastos said. "All the things you would look for in a job, they're finding."

Yet, The Berkshire still isn't fully staffed, either. And with bar and patio seating expected to open soon, not to mention Pennsylvania moving closer to 100% occupancy inside, Vlastos isn't sure he'll wind up hiring for every open position.

"I'm not gonna put out ads that we're hiring and not have people show up for interviews, then say, 'Oh, wow, I'm not gonna serve my customers,'" Vlastos said. "We'll have to get creative, and by being creative, those jobs might not be there in six months."

Clark said if the state goes to 100% in two months, she isn't sure her restaurant will have the people, while at the Go Fish! Seafood stand in the Fairgrounds Farmers Market in Muhlenberg Township, she's struggling to field applicants.

For now, it seems about the only thing anybody can do is wait and hope restaurant workers begin returning to restaurants as quickly as diners do — ideally, more quickly.

"I hope we're not continuously looking for people," said Stenchever. "I think everybody's hoping as things keep moving forward, restrictions keep lifting, people get vaccinated and everything becomes a safer environment, hiring will get easier." 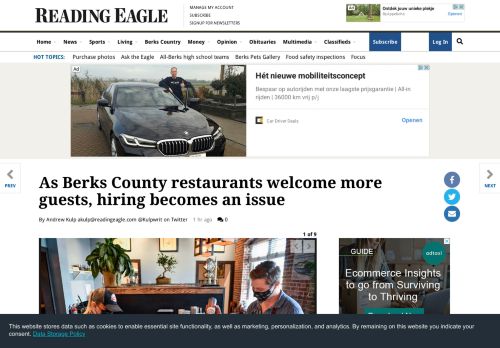 This article has been aggregated from www.readingeagle.com and they maybe/are the copyright owners of the same. If you are the Author/Copyright owner of this article and want us to remove the same then send an email to admin@blog.restaurant so that we can delete it immediately. We sincerely regret and apologies for any inconvenience caused to you due to the same. Though it is your decision but please take note that the link to your website and the article have been given above, within and on the bottom of the article.