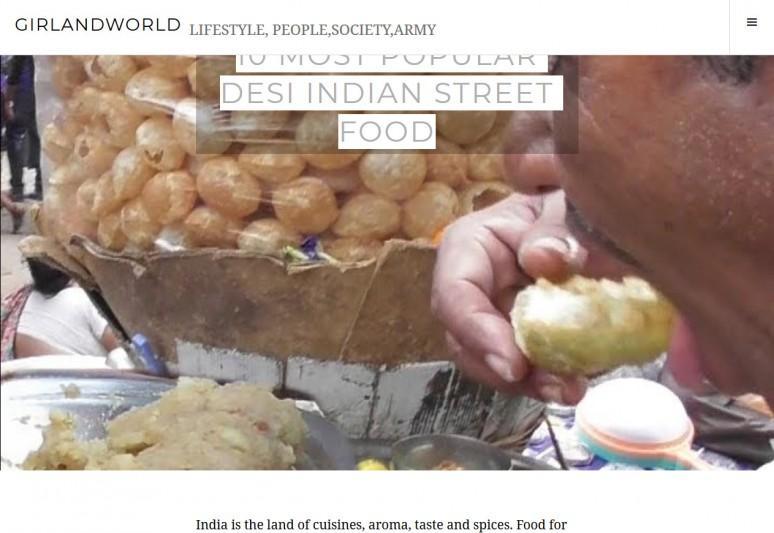 India is the land of cuisines, aroma, taste and spices. Food for us is just not ‘Food’ but emotion. We don’t create dishes, we live them. Food does not only ignites gastronomical temptations but also incites devotion. Indians have cult followings when it comes to food, people really get emotional so much so that swords can be brought out over the claims of origin of the food. Why do you think century old iconic rivalry between Bengalis or Odiya folks over Rosogulla exists at the first place? Anyway, my job here is to present the list of top most popular street food of India which can not only easily spotted at every nook and corner but these cuisines also unite common people beyond class, creed and religion. The street food which not only satiate our hunger but also we have grown over. Lets take a look

No list of Desi street food can ever be completed without the mention of Samosa. The traingular savoury filled deep fried pastry. The filling can range from potatoes to spice to lentils to peas,cheese even beef at some regons of India. Another popular version of Samosa is chowmein filled chienese samosa or tiny coctail samosa. Though Samosa for north Indians always meant deep fried smoking hot potato filled savoury snack appetizer served with Dhaniye Pundine ki chutney and if it is served with ghughuni (black gram cooked in gravy) and sweet imlee chutney then for them it is the complete main coure. and They are done.

idlee and DOsa today can not be righteously claimed by South Indians but today they are included in the list of Indian street food. The savoury rice cake and rice pancakes made from fermented batter as the Americans would call it are so so and so popular from Kashmir to Kanyakumari that no particular region can limit the insane grip these healthy snacks hold over Indian diaspora. Served with coconut chutney and Sāmbhar (call it soup made of lentils and vegetables) and sold right from the cycle stands to straight from the five star hotels.

Can we ever imagine Indian streets without the vendors selling Bhelpuri right over their cycles? Savoury snack made of puffed rice mixed with raw vegetables like onions, tomatoes, chilli but what really kicks in is the additional of tangy tamarind sauce,green chilli sauce,and nuts like ground nuts or black grams topped with lemon juice and sev. Usually Mumbai Juhu beach is famous for legendary bhel puri sellers but bhelpuri is indeed one of the most loved Chaat Snack in India which is cherished by all beyond the age groups.

Can one can ever cliam talking about Indian street food and not mention Golgappe. Also known as Panipuri, gupchup and Phuchka? The tiny little hollow crispy flour puris filled with potato, onion, chickpeas, coriander chutney and dipped in spicy mint flavored or many a times tamarind flavoured water tantalize the taste buds. If samosa is king of street foods in India then Golgappa certainly holds the crown for being the queen. And why just India these little things hold the heart of entire Indian subcontinent be it Pakistan or Bangladesh, people eat it with equal affection.

Native of NepalTibet,Bhutan and other Himalayan states of India Momos no longer belong to these states only but they now are nation wide sensation. Momos are not just plain dumplings but meat and vegetables filled to be eaten with extra hot spicy chilly sauce. Traditionally they are steamed but these days we can also find various varities of Momos at every nook and corner like fried,tandoori,open momo and even green momo.

Talking about Momo love easily remind us its close relative Chow Mein. Though traditionally Chow Mein is related to Chinese origin but today Indian Chow Mein is what we call our very own street food. The small food carts at roadsides selling Chow Mein can easily be spotted. The stir fried noodles with vegetables, sauces, vinegar and soya sauce has romanticized the idea of eating at the side of a road where good folks can be seen fondling with forks. Chow mein is especially popular with kids adn children across India love eating CHowmein which is Indian version of junk food to desi moms who never forget to laden the noodles with loads of fresh green vegetable when they make it at home.

Well,Jalebi is an exquisite sweet which is exclusively sold during morning times across road side small stalls or sweet shops where long lines waiting for hot twisted sweetmeat can be overwhelming.

Kachori is one of the most famous Indian street food which is found in varied forms, shapes and size. the stuffings inside the spicy deep-fried snack may vary drastically from one state to another in India. from potato stuffing to pulses to meat there is no dearth what you fill it with. but usually it is a round flattened ball made of fine flour filled with a stuffing of baked mixture of yellow moong dal or urad dal (crushed and washed horse beans), besan (crushed and washed gram flour), black pepper, red chili powder, salt and other spices.

Vada Pav or wada pav is the common man’s food in Mumbai and is a popular street food snack across whole Maharashtra. It is basically a savory slider of fried mashed potato fritters stuffed in a dinner roll. It is generally accompanied with one or more chutneys and a green chili pepper.[5] Although it originated as cheap street food in Mumbai, it is now served in food stalls and restaurants across India. It is also called Bombay burger. Large popular fast food restaurant chain such as Kunjvihar Jumbo King in Mulund and Goli Vada Pav also primarily serves pav vada.[10][14] Outside of Mumbai, a variant of vada pav is pav vada is famous in Nashik

Chole Bhature also known as Chana Bhatura is one of the most popular Punjabi dish liked almost all over India. Chole stands for a spiced tangy chickpea curry and Bhatura is a soft and fluffy fried leavened bread.it is a popular street food meal in northern india, particularly in the punjab, delhi area, but also in rawalpindi pakistan. it is generally eaten as a breakfast dish with yoghurt based beverage lassi, but can be served any time of the day for a complete and satisfying meal. 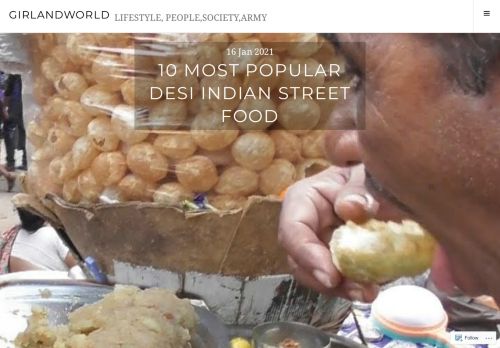 This article has been aggregated from girlandworld.com and they maybe/are the copyright owners of the same. If you are the Author/Copyright owner of this article and want us to remove the same then send an email to admin@blog.restaurant so that we can delete it immediately. We sincerely regret and apologies for any inconvenience caused to you due to the same. Though it is your decision but please take note that the link to your website and the article have been given above, within and on the bottom of the article.