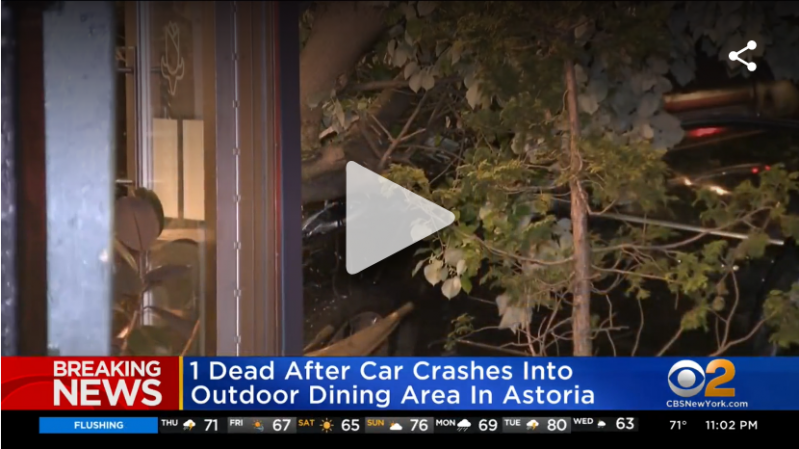 NEW YORK (CBSNewYork) — One person died and several were injured after a vehicle crashed into a restaurant’s outdoor dining area in Queens on Thursday.

It happened around 7:45 p.m. at 35th Street near Ditmars Boulevard.

Police say the driver was trying to cut off the car in front of her when she lost control and slammed into restaurant Rosatoro’s seating structure, taking a tree down with her.

“It looked like it kinda accelerated,” one witness said. “I saw it aim into it and then the tree fell first. I think that’s what drew a lot of people into it.”

As CBS2’s Ali Bauman reports, at least three people were rushed to nearby hospitals, and one man succumbed to his injuries. He was identified overnight as 37-year-old Xing Lin.

Surveillance video shows the moment a car crashes into an outdoor dining structure in Astoria Queens on Thursday evening. One person was killed in the crash. @CBSNewYork pic.twitter.com/Qxt9GiMP7T

Surveillance video shows the chaos as a car rammed through the outdoor dining structure, jumped a curb and hit a tree, stopping just short of the restaurant’s open wall.

“The car was smoking. Nobody knew what to do,” witness Teresa Rubbino said.

One person died and several others were hurt after someone drove into a restaurant’s outdoor dining area in Queens on April 29, 2021. (Credit: Citizen)

Police say it appears the driver, a 61-year-old woman, got frustrated by a slow car ahead of her, so she tried going around by driving in the bike lane. That’s when she lost control of the car.

“It’s bound to happen. Look at all these areas, all these restaurants. I mean, I’m not saying they don’t make their money, but people gotta be careful. They gotta drive safer,” Rubbino said.

Police say the vehicle slammed into Xin, believed to be a food deliveryman riding a Yamaha scooter.

Lin died at the hospital. The driver and someone dining at the restaurant were also rushed by ambulance, but are expected to be OK.

Right now, it’s unclear if the driver will be charged.

The restaurant manager told CBS2 nobody was actually seated in the outdoor dining structure due to the rain, otherwise this deadly accident might have been even worse.

This article has been aggregated from newyork.cbslocal.com and they maybe/are the copyright owners of the same. If you are the Author/Copyright owner of this article and want us to remove the same then send an email to admin@blog.restaurant so that we can delete it immediately. We sincerely regret and apologies for any inconvenience caused to you due to the same. Though it is your decision but please take note that the link to your website and the article have been given above, within and on the bottom of the article.